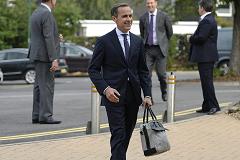 He broke the mold with forward guidance – now, new Bank of England (BoE) Governor Mark Carney is setting trends with his clothing.

Dubbed the “rock-star banker,” Carney is often pictured wearing colorful and well-fitting suits, which makes him appear likable, according to a one celebrity personal stylist.

“He is more approachable looking because of the way he dresses,” London-based Gabrielle Teare told CNBC. “Carney wears open collars and slim ties which is what you wear in a creative environment.”

She added: “His appearance is charismatic with a lot of credibility, but he has a creative edge. He is the George Clooney of banking.”

Carney made a break with his predecessor at the BoE, Mervyn King, earlier this month by introducing a policy of forward guidance, which ties interest rates to the rate of unemployment.

But the Canadian also made a departure from King’s fashion sense, according to Teare. “If you look at Mervyn King as a contrast, he was always wearing an ultra boring shirt and tie combo,” she said.

Carney’s style also got a vote of confidence from leading men’s magazine GQ, which said he was “schooling his peers in back-to-work style.”

The publication praised his so-called “manbag” in particular. “That grey leather carrier he sported is not only in one of this season’s most popular colors when it comes to work attire, but it also hits on this autumn’s trend for boxy – and might we add practical – squared-off bags,” GQ wrote on Thursday.

As Carney battles to steer the U.K. out of one the country’s worst financial crises in history, he can be safe in the knowledge that he looks good doing it.